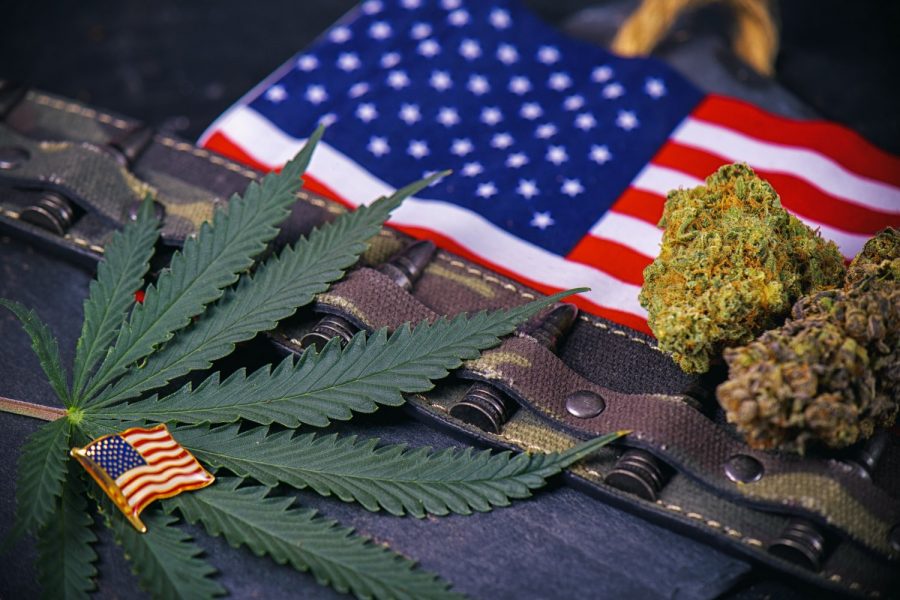 As the coronavirus pandemic lingers, head of the U.S. Department of Veterans Affairs (VA) is being urged to allow verbal medical cannabis recommendations for military servicemen. A letter led by Sen. Elizabeth Warren (D-MA) was addressed to the VA from seven members of the Massachusetts congressional delegation.

The group of lawmakers – which included House Rules Committee Chairman James McGovern (D-MA) – are prompting the VA to change their policies; even if the changes are just enacted temporarily, until the COVID-19 situation has relaxed.

“As this global pandemic continues to adversely affect veterans behavioral and physical health conditions, we believe that veterans who legally use cannabis in the Commonwealth to treat their ailments deserve to receive more robust assistance from qualified medical personnel at their local VA,” wrote the lawmakers, who also suggested that the “VA should consider making this directive the official policy.”

Marijuana Moment was the first publication to publish details of the letter, which emphasized the problem that recreational cannabis store closures in Massachusetts has caused amid COVID-19; lack of access to recreational facilities means that non-patients are resorting to registering for plant-based medicines.

By allowing veterans to obtain a written recommendation from VA doctors amid COVID-19, there’s a good chance that policy changes could be implemented in the foreseeable future. At the current time, veterans are being advised to open up about their medical cannabis consumption to doctors. On the other hand, this discussion is getting them nowhere, since the rules restrict physicians to giving advice… not prescriptions.

“Veterans in Massachusetts use medical [cannabis] to treat a variety of ailments, including post-traumatic stress disorder (PTSD), anxiety, chronic pain, and others,” reads an excerpt from the letter, which was also signed by Sen. Ed Markey and Reps. Ayanna Pressley, Katherine Clark, Seth Moulton and Joseph Kennedy III.

VA Secretary Robert Wilkie was on the receiving end of the letter, which also discussed how COVID-19 may worsen the symptoms of pre-existing health conditions. Since many veterans depend on the plant as a treatment for various health conditions, being unable to visit adult-use dispensaries in Massachusetts is proving problematic.

“During this unprecedented public health emergency, VA should issue a directive explicitly authorizing its health care providers to make sensible, clinically sound verbal recommendations to veterans related to participation in state-approved medical [cannabis] programs and services and to provide advice to veterans as they complete forms and other paperwork reflecting those recommendations,” the letter continued.

Lawmakers stress the importance of clinicians being given the heads-up – once a veteran asks about becoming a medical cannabis patient – to make verbal referrals “to knowledgeable non-VA providers who are registered with a state-approved program and can offer feasible options that minimize, or completely waive, the cost to the veteran.”

One of the representatives who signed the letter, Rep. Katherine Clark, is requesting that the closure of adult-use cannabis stores in Massachusetts be reversed to ease the process of veterans obtaining medicine; if the request to grant doctor recommendations is denied.
Medical cannabis for veterans in Massachusetts: VA clinicians would not be subject to disciplinary action
Another point that was made in the letter was that VA clinicians won’t be at risk of facing disciplinary action if they provide veterans with a recommendation for medical cannabis. In order to accomplish this, the VA has been asked to collaborate alongside the Justice Department and inform all BA producers that these clinical activities will not be punishable.

“By authorizing these tailored, temporary actions, the VA could help Massachusetts veterans who use, or are interested in using, medical [cannabis] receive more comprehensive clinical advice from their VA providers, reduce opioid addiction and substance use disorders, and achieve better health outcomes,” they concluded.

U.S. Representative Earl Francis Blumenauer is supportive of the attempt to expand veterans’ access to cannabis. He told Marijuana Moment reporters that the letter signifies an “important step towards removing barriers that many veterans face when seeking care.”

“During this time when we are recommending that those at risk distance themselves from others, that includes going to the doctor unnecessarily. Veterans deserve access to medical cannabis treatment at the recommendation of their physician, period. It’s past time we give them that unfettered access,” said Blumenauer, who recently co-sponsored a measure that would allow VA providers to offer medical cannabis recommendations.