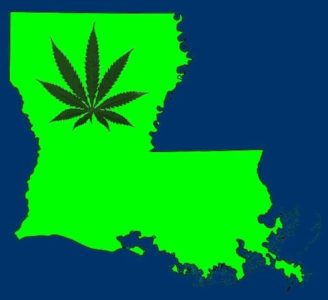 On Wednesday, May 6, a bill to expand medical cannabis access in Louisiana was approved by a House committee. Under the terms of the new bill, doctors will be allowed to supply patient recommendations for any condition that is deemed to be “debilitating”. Lawmakers also progressed a different chunk of legislation that would permit dispensaries to send medical cannabis products directly to the homes of qualified patients.

Cannabis reform in Louisiana has taken a positive twist in the state, where its economy partly relaunched on May 8. Back on March 11, Gov. John Bel Edwards imposed a Public Health Emergency to reduce the risks of COVID-19 spreading further; Louisiana was one of the worst-impacted U.S. states, with the most recent coronavirus updates in Louisiana reporting 35,038 COVID-19 cases and 2,458 deaths. The stay-at-home order was then extended until May 15. Now, at the end of a tedious two-month wait, business owners and customers are rejoicing as they slowly slip back into normality.
Adjournment of many State Legislatures has arisen due to coronavirus pandemic
Fortunately for Louisiana’s medical cannabis consumers, the State Legislature is considering a number of bills that could soon be enacted to broaden its patient program. At the beginning of May, numerous bills sponsored by Rep. Larry Bagley (R) advanced in the House Health and Welfare Committee. Both pieces of legislation that were approved by the House Health and Welfare Committee will now head to the Louisiana Legislature for full debate.

Unitedly progressive bills that have been sponsored by Bagley (R) would enable physicians to provide recommendations for medical cannabis if a patient has been diagnosed with any debilitating condition (House Bill 819), as well as permit permanent home cannabis delivery services (House Bill 972) — HB 819 passed by House members with a vote of 77 to 15, whereas HB 792 passed by a vote of 81 to 13. Numerous other cannabis reform motives are set to be considered by the committee, including one that would eliminate raw cannabis prohibition (Rep. Ted James’ HB 385).
Personal physicians can now prescribe medical cannabis in Louisiana
Existing law for medical cannabis in Louisiana features 14 qualifying conditions. Included in the list of conditions that a patient must be diagnosed with in order to gain acceptance into the state’s medical cannabis program include cancer, epilepsy, muscle spasms – of a debilitating level – and Parkinson’s disease.

According to the original draft of Louisiana’s medical cannabis expansion legislation, concussions and traumatic brain injuries would have been included. Luckily for in-need patients who don’t fall under any of the existing and to-be-added categories, a wider range of conditions have since been included on the list of qualifying conditions; the panel made a unanimous decision to include any condition that is deemed “debilitating to an individual patient” by a licensed physician.

“I’ll say this. I have never been a proponent of medical [cannabis],” Bagley explained to Marijuana Moment in a phone interview. “I voted against every piece of legislation that came down because I just didn’t believe in it and I thought there was an ulterior motive. But now, constituents in my area, they come to me and they ask me for help because they’re having pain, they can’t find things to cure the pain. They’re using opioids, some of them, they’ve just got problems that the doctors can’t seem to help.”

Bagley says that expanding Louisiana’s list of qualifying conditions will prove worthwhile, considering the fact that each patient’s personal physician can get their hands on a script with ease. Moreover, since designated physicians know more about their specific patients than anyone else, Bagley believes that this approach will give parties on both sides an extra boost of confidence in prescribing/obtaining plant-based medicines.

“Lawmakers are increasingly recognizing that it makes no sense to treat medical cannabis more restrictive than far more dangerous prescription medicines, which can be delivered to patients’ doors and prescribed off-label,” said the director of state policies for the Marijuana Policy Project, Karen O’Keefe. “Today’s committee votes were an important step toward to a more compassionate, less onerous medical cannabis program in Louisiana.”

Another aspect of the amended legislation for Louisiana’s medical cannabis program would require the development of a regulatory body to prescribe the “procedures and regulations relative to delivery of dispensed [cannabis] to patients by designated employees or agents of the pharmacy.” This amendment was partially introduced by the Department of Pharmacy in March, when it released a memo temporarily permitting dispensaries to deliver patients with their cannabis-based medicines amid the COVID-19 crisis.

Life is getting back to normal for Louisianans amid COVID-19
On May 8, two days after the advancement of Louisiana’s medical cannabis bills, Gov. Edwards’ separate announcement meant that a wide range of businesses in Louisiana – such as hair salons/barber shops, casinos, gymnasiums and bar-type food establishments – could reopen with 25 percent capacity. Considering the circumstances, these social distancing restrictions are essential, say officials.
Plus, if the amendments to Louisiana’s medical cannabis bill are approved and effectuated, patients could have the convenience of permanent delivery services. This suggests that the effects of COVID-19 will have lasting effects on the state’s legal weed industry.