Poland celebrates arrival of its largest ever medical cannabis shipment

During the week that concluded on November 21, the market for medical cannabis in Poland celebrated its largest contribution yet — 140kg of THC-rich medical cannabis strains delivered by Aurora Europe.

The shipment was confirmed several months after cannabis supplies had been starved across the European country.

Supply issues had previously left patients struggling to access their medicine, thus proving the sheer impact that the latest shipment is likely to have on the medical cannabis community.

However, there’s a big chance that supply shortages may soon be on the horizon once again, with numerous pharmacies in Poland alerting authorities that their 140kg supply is already drying up.
Patient demand for medical cannabis in Poland is growing faster than regulations
Medical cannabis in Poland was legalized back in 2017. Since this time, demand has surged. However, the industry is not running smoothly just yet.

Due to conservative rules, many pharmacies across Poland temporarily ran out of cannabis supplies. Consequently, this has forced desperate patients to purchase the plant from unregulated sources, such as black market dealers.

Until the country starts churning out more of its supply – domestic production of the plant is forbidden – the medical cannabis market in Poland will be largely dependent on imports from high-volume countries like Canada, Denmark and Germany.

So far, the Office for Registration of Medicinal Products (URPL) has approved the following six medical cannabis strains (with more likely to be approved in the future:) 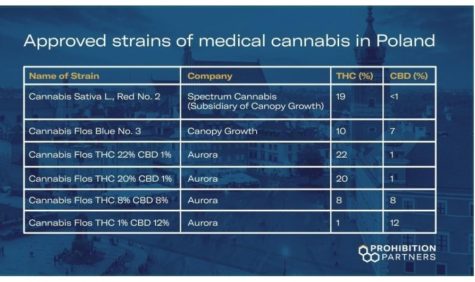 This, lobbyists say, could be made possible by boosting the number of approved pharmaceutical-grade products, as well as improving affordability – e.g. through offering insurance coverage – and ensuring supply consistency.

Although extracted cannabis products are generally permitted in Poland, no product of this kind has actually received government approval so far.

Conversely, medical cannabis requires specific approval by the Chief Pharmaceutical Inspectorate (GIF) prior to patient distribution. However, lobbyists have noted that this process may cause delays for in-need patients.

At the current time, medical cannabis patients in Poland are not privileged with reimbursement. To make matters worse, the average price of PLN 650–670 (USD$159–$164) for 10-gram packages is believed to be too expensive for most.