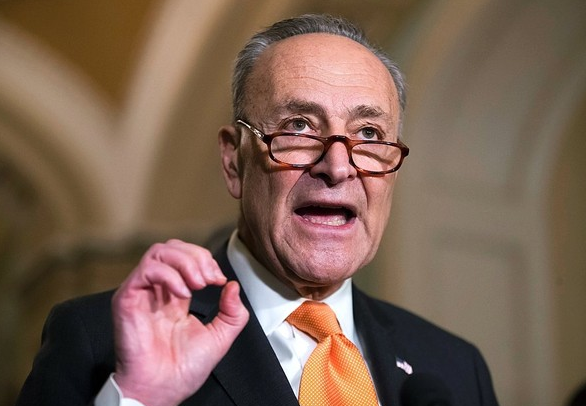 U.S. lawmakers are being urged by Senate Majority Leader Chuck Schumer (D-NY), Senate Finance Committee Chairman Ron Wyden (D-OR) and Sen. Cory Booker (D-NJ) to explore the provisions contained in a bill that, if approved and enacted into law, would orthodoxly legalize cannabis.

“Supreme Court Justice Louis Brandeis once famously said that the states are America’s laboratories of democracy,” reads an excerpt from a letter that was sent to colleagues on Thursday, February 10 by Schumer, Wyden and Booker. “When it comes to reforming the nation’s antiquated cannabis laws, he could not have been more right.”

The Senators’ measure, which is expected to be filed imminently, aims “to right the wrongs of the past and ensure that the federal government is matching the advancements made in states across the country.”

According to the trio, the subject of cannabis reform in the U.S. is an “issue of individual freedom and basic fairness that clearly transcends party lines.”

They also drew attention to the fact that a number of daunting obstacles continue to block states from enacting legal cannabis laws, with federal cannabis prohibition being a major setback.

“As more and more states move to legalize cannabis for both adult and medical use, the federal government has an important role to play. Hundreds of millions of Americans live in states that have legalized cannabis in some form while it remains illegal at the federal level,” the letter continued.

“This discrepancy leads to confusion and uncertainty and raises significant questions around criminal justice reform, economic development and small business growth, and public health and safety, all of which we believe require some type of federal answer.”
Schumer and colleagues first proposed the 163-page cannabis reform plan in July 2021
Senate Majority Leader Schumer has been on the receiving end of criticism and negative feedback for his laziness in getting a cannabis proposal under the noses of lawmakers. However, during a recently-held press conference, he confirmed that his main “goal” is to formally introduce the Cannabis Administration and Opportunity Act this coming April.

The Act extends over 163 pages and was initially put forward for consideration in July of last year. Based on the proposal’s legal language, it would federally deschedule the cannabis plant, as well as provide record expungement for previous cannabis convicts, allow states to decide their own cannabis policies and encourage resentencing petitions.

A chunk of revenue earned through legal cannabis transactions would be earmarked for grant program funding. Such programs would be designed to assist people in communities worst-affected by pot prohibition in participating in the legal cannabis market. Additionally, the Senators’ cannabis reform bill seeks to impose a federal tax on all cannabis-containing products.

What’s more, Schumer’s cannabis legislation effort would task the Bureau of Alcohol, Tobacco, Firearms and Explosives (ATF), the Alcohol and Tobacco Tax and Trade Bureau (TTB) and the Food and Drug Administration (FDA) with providing regulatory oversight for the cannabis industry, as opposed to the Drug Enforcement Administration (DEA).
“It’s long past time for the federal government to catch up” to cannabis reform states, says Schumer
States that have enacted some level of cannabis reform, whether in the form of medical cannabis legalization, adult-use cannabis legalization or decriminalization, should serve as inspiration for federal lawmakers to update their prohibitionist laws, says Schumer.

At his speech on the Senate floor, during which he spoke about the Dear Colleague letter, Schumer said that “it’s long past time for the federal government to catch up” to states that have discarded their formerly prohibitionist rules.

“For decades, federal cannabis laws have caused immense damage to millions of Americans, particularly Black and Hispanic people who have been unfairly targeted by these laws,” he continued. “We need to change that. We need to create opportunities for entrepreneurs and small businesses to legitimately pursue new opportunities, and comprehensive federal cannabis legislation is critical, critical to reaching that goal.”

For things to progress in the right direction, “senators who have dealt with the challenges and realities of legalization in their own states” and members of “relevant committees” who maintain authority on cannabis-focused issues are being asked to provide input.

“In the weeks ahead, we will continue the work of incorporating these comments as we aim to introduce legislation soon that is as comprehensive and as reflective of as many relevant views and voices as possible,” the Senators promised.