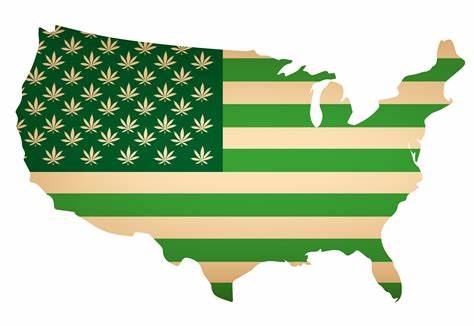 The cannabis market is among the fastest-growing industries on the planet, as recently confirmed by a New Frontier Data report.

After teaming up with FTI Consulting to explore the rapid momentum of the cannabis market, “The 2022 U.S. Cannabis Report: Industry Projections & Trends” was published.

If the report’s findings are anything to go by, the U.S. legal cannabis market could be pulling in more than $57 billion by the year 2030.

According to New Frontier data researchers, the market will grow at a compound annual growth rate (CAGR) of 14 percent in legal states. Plus, if the 18 remaining state markets left to legalize cannabis proceed to do so, analysts believe that this figure may eventually surpass $72 billion.

Constant growth of the market is largely stimulated by the fact that research initiatives are blossoming, not to mention the fact that product developers are constantly dabbling with innovation in product design and technology.
2022 U.S. Cannabis Report: Why are cannabis sales on an upward incline across the U.S.?
The main stimulators of growth, say industry analysts, are the ever-changing laws surrounding cannabis in the U.S. and increased demand from diverse consumer demographics.

What’s more, as the world begins to embrace cannabis use – whether it’s for recreational or medical purposes – a growing number of adults are using cannabis.

“The seismic shift in public perception around cannabis is fueled in part by the growing exposure that Americans have through legal, regulated markets,” said New Frontier Data’s CEO, Gary Allen.

“Even in the absence of a federal framework, the resilience and growth potential of a determined industry is laying the foundation for a safe and sustainable consumer category,” he added.
2022 U.S. Cannabis Report: Key takeaways from the report
Self-reported cannabis consumption rates have seen a drastic increase since 2012. If sustained, the number of U.S. consumers will surge from 47 million in 2020 to 71 million by the year 2030.

U.S. medical markets are steering towards expansion, with the number of registered patients predicted to rise to 5.7 million in 2030. That works out as 1.6 percent of the adult population.

Should all 18 potential markets choose to legalize cannabis by 2030, 47 percent of total demand would come from legal cannabis purchases. In comparison with 2021, this would be 27 percent more than in 2021, thus suggesting that the legal market is properly disturbing illicit markets.

Regardless of state-level momentum, the researchers say, the likelihood of federal cannabis reform happening are bleak. However, after the 2022 midterm elections, it’s possible that a more limited bill like cannabis banking reform may be considered.